Norwood Hardware and Supply Company has a long history of being a valued supplier to the commercial construction industry. Its origins trace back to the founding of Norwood Paint & Hardware by the Stuhlbarg family in approximately 1905.

During the first half of the 20th century the business focus was a complete full line hardware store with an emphasis on architectural door hardware. In 1954 Barry Stuhlbarg, the grandson of the original founder, started up a separate division and named it Norwood Hardware. His vision was to create strategic alliances with lock manufacturers and become a distributor that serviced general contractors building commercial projects.

In 1957 Robert Chabot was hired from Lockwood Manufacturing in Fitchburg, Massachusetts to promote the company to the architectural community. Robert eventually became president of the company and lead all functions.

In 1977 Robert purchased Norwood Hardware from Barry Stuhlbarg. This change in ownership helped the company expand its offering to include steel doors, frames, plastic laminate doors and wood doors. It had become the first in the region to be a "Total Door Opening" distributor.

During the 1980's Robert's wife, Gloria Chabot, took an active role in the company performing many functions that included human resources and general administration. With her involvement the company grew in size to approximately 30 employees. In 1982 the company moved to a new location at 1714 Cleneay Avenue in Norwood, Ohio from its previous home in Norwood on Bennett Avenue where it had resided for almost 80 years.

Robert and Gloria's leadership helped establish stability of the company and kept it growing with additions and expansions of decorative hardware and locksmith services.

In 1990 Gloria had to assume all responsibilities of leadership when Robert suddenly had a medical condition that prevented any involvement in the company. Her steady hand of control and insight helped nurture the many employees the company now had, including sons Matt and Craig.

In 1996 Norwood Hardware saw the need for a new facility and had a 58,000 square foot facility built in Evendale, Ohio. This now allowed Norwood Hardware to grow in several strategic areas including greater shop and welding capabilities and the beginning of preassembling of door openings. Gloria helped develop the future leaders of the company including sons Matt, Craig and daughter-in-law Kathy Chabot. With the confidence in the next generation, Gloria handed off the baton, but her mark of being the CEO of the company had been made.

As the construction industry changed so did Norwood Hardware. The need for electronic hardware systems began to grow so the company developed capabilities in this area. Many employees were trained and systems were put in place to support this segment of the market. A separate group within the company, lead by Kathy Chabot, was set up to develop emphasis in Access Control Solutions for higher education, industrial and health care projects.

The company has embraced lean principles to drive efficiency and to provide high levels of service to its customers. The company holds Kaizen events about twice a year to focus on specific areas of improvement and implement change. With this focus on improvement the company now offers pre-installation of hardware on doors prior to shipping to a jobsite. This also includes complete wiring and testing of electrified doors.

Norwood Hardware also now offers complete shop painting of doors prior to hardware assembly. This capability has been established with the implementation of an Infrared curing line.

Norwood Hardware is well positioned to continue to be a market leader with its investment into people, processes and physical plant.

Under the leadership of current CEO Kathy Chabot, Norwood Hardware is proud to carry on the legacy of being a female owned and run company. The company's goal is to remain relevant and support the needs of its growing customer base. 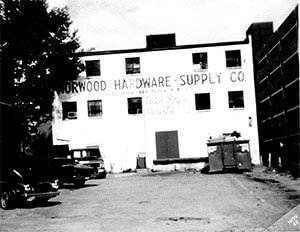